Everything You Need To Know About Back Outlet Toilets

All toilets have to connect to a sewer line to dispose of waste. Generally, we see the toilet sitting directly over-top of the rough-in, which connects to piping that in turn connects to the city sewage system or your septic system. This kind of rough-in takes advantage of gravity to better feed the waste through the sewer lines. 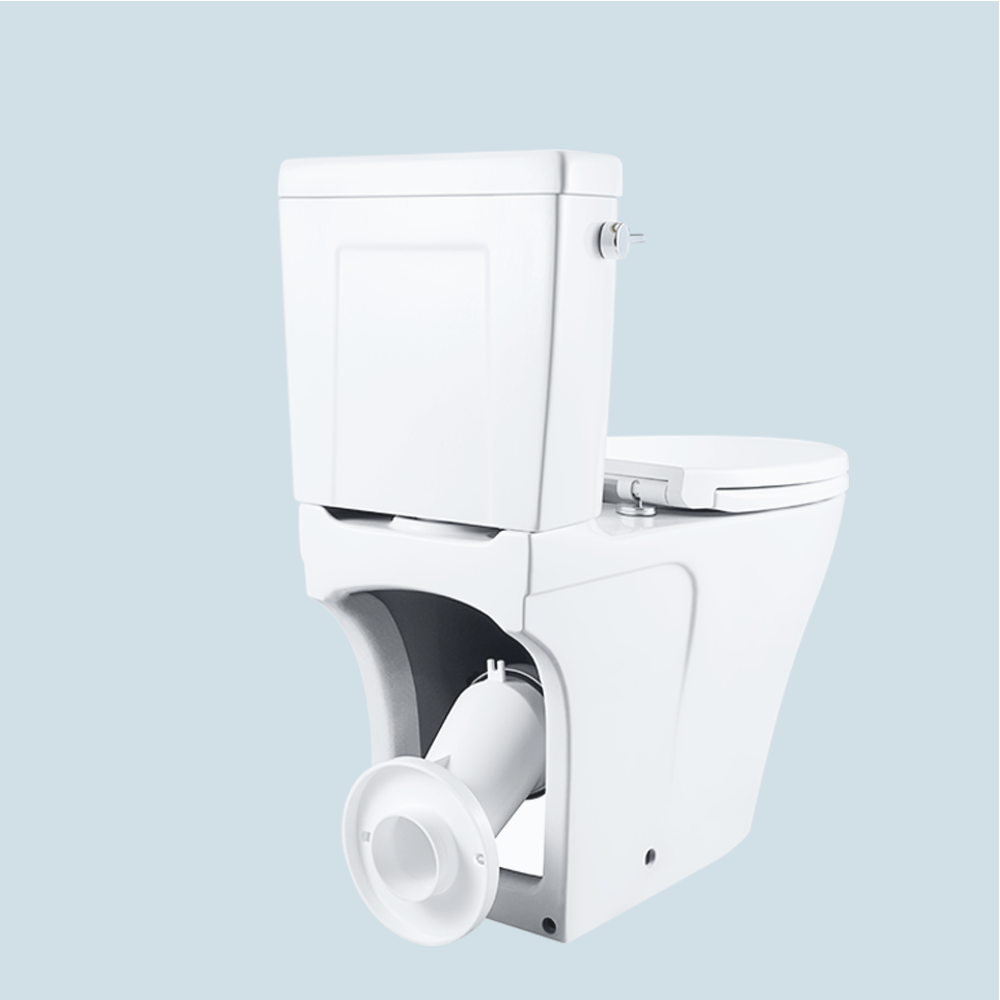 Why are back outlet toilets more prevalent in high-rise buildings?
Vertical space-saving! Developers can reduce the amount of space between floors (or levels), allowing them to increase the number of floors in a building without needing to build higher. When sewer connections are located under the toilet, you have to allow room for pipes below the floor and then connect to the main sewer lines. However, if the sewer line connection is located in the wall itself, you can save space below the floor. This might not be a big deal for a single-family house, but when building a high rise apartment building, saving a few inches of vertical space per floor may allow additional floors to be built. So, where space saving is really important, like for example in Manhattan, this can be a huge advantage!

Benefits of a Back Outlet Toilet:
Big developers aren't the only ones who can benefit from a back outlet toilet! Have you ever seen a basement bathroom that is positioned one or two steps up? A raised bathroom is often a tell-tale sign that it was added after the initial build. Often, it is easier to build up the floor height instead of digging up the floor to install the plumbing connections. By running the plumbing out the back of the toilet and connecting into the plumbing line behind the wall, you can easily exchange your old, outdated toilet for a new, water-conserving one.

Back outlet toilets also tend to hide a lot of the plumbing compared to a regular bolt down type toilet because the toilet is made to push up against the wall, hiding some of the less attractive connections. They offer a much sleeker profile as the bowl is designed to fit up against the wall, elongating the look of the fixture.

Siphonic
A siphonic toilet works by creating a siphon in the trapway which then pulls the water and then waste out of the bowl. This is the most common flush type in North America, but often siphonic technology, when used for a back outlet product, is problematic in that there isn’t enough power in the flush to adequately pull waste into the wall-mounted rough-in due to the lack of assistance from gravity. Because the water is needed to create the siphon and pull out the waste, water is followed by waste, with a shorter drain line carry.

Washdown
Wash-down toilets don’t require the creation of a siphon. They work by very quickly releasing water from the tank into the bowl which in turn pushes waste out, followed by the water. The waste goes first and is followed by water, creating a powerful flush and longer drain line carry.

Wash-Down technology allows for a much larger trapway size, doesn’t clog and can accommodate the added force required for a back outlet toilet, so there is no change between flushing performance of standard and back outlet toilets.

Pressure assist
Traditional siphonic back outlet toilets often don't flush well enough on their own, so manufacturers turn to pressure-assist models. These have a bladder inside the tank under significant air pressure that forcefully pulls the waste through the trapway. Pressure assist models are generally very effective flushing toilets, but are also loud, expensive and pricey to repair and maintain.

When purchasing a new toilet, you want to take time to do the research. Not only do you need a toilet that functions perfectly 100% of the time but it’s just as important to take noise, design and water savings into consideration because a good toilet can last you decades.

Not only do you need a toilet that functions perfectly 100% of the time but it’s just as important to take noise, design and water savings into consideration because a good toilet can last you decades.